Tulsa People magazine has a new article about good friend and Owner of Runnersworld, Kathy Hoover. Kathy & Brian run the best store in Tulsa and do a lot of great things for the Tulsa running community. It has been my privilege to know them and race on their race team. They have been great friends to my family and it has been an honor to call them friends. Check out the article here. 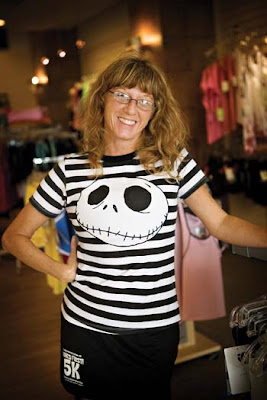 Race Across The Sky


Can't wait for this to come out. This should be awesome!
Posted by tomdog at 3:54 PM 3 comments:

As the old KISS song goes, "You wanted the best, you got the best!" I believe that if something is worth doing, it is worth doing right. Having said that, I can officially say that I have joined the Tulsa Iron triathlon team. I have decided to focus in on Triathlons for next year and set some key races as goals. In order for me to be the best and perform at the level I need on race day, I have hired a coach. I have not just hired any coach, but I have hired the best coach for triathlon in Tulsa. The one, the only, Rob Chance. 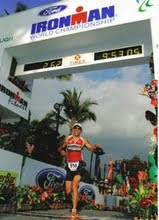 This is a picture of Rob finishing an Ironman, which I so boldly stole from his blog. Rob has over twenty years experience in triathlons and has stepped over into the world of coaching and has formed Tulsa Iron. The group is based around the idea of helping others achieve their dreams and perform at their best. This is not about just saying that you finished a race, but being able to say that you competed at your best with your maximum effort. This is all done through a series of training routines all based around being your best on race day. 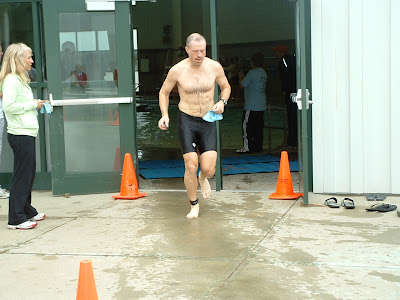 I have a done a few tri's and Du's and have done fairly well, but the swim has always been my weakness and that is what we are going to work on first. I had my first swim lesson this week with Duncan Wise and we are going to focus on getting this up to speed first, before we go ahead into full bore training. I am sure that in no time I will be a better swimmer and be able to be more competitive. 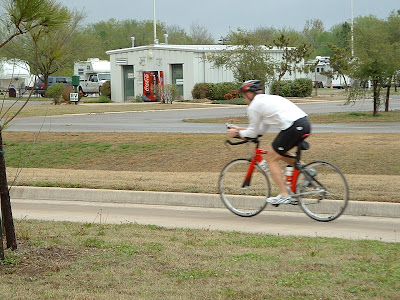 I enjoy the variety of the training involved in the three disciplines as it gives me a break from all the running. I know that I have a lot more potential to get better and faster in Tri's and I know with Rob's help, I will be able to achieve that.

For now it is time to work on the swim, pick some goals races, and strives towards the goals ahead. I am so excited about this and cannot wait to see the results. I will definitely be keeping you updated on my progress over the next year. Onward and Upward!
Posted by tomdog at 9:41 AM 2 comments:

Things have been really chaotic as of late and I have not had anytime to blog. Hopefully that will change. Last weekend Will started an intra-mural football league at Rhema. He had his first game last Saturday and he is really excited about playing. 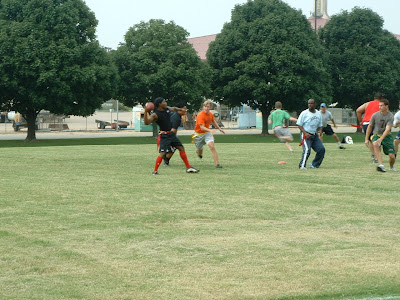 He is in the green making a cut to the left. He was a little slow starting out, but he came around towards the end. He is really laid back and needs to be more aggressive. 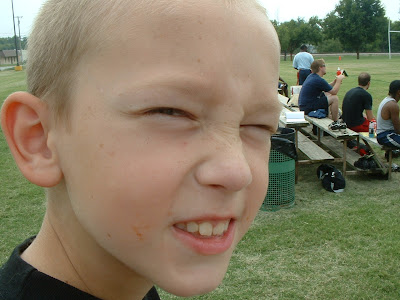 Wyatt in the bleachers. Say What? If you look close you can still see pizza sauce on his face. 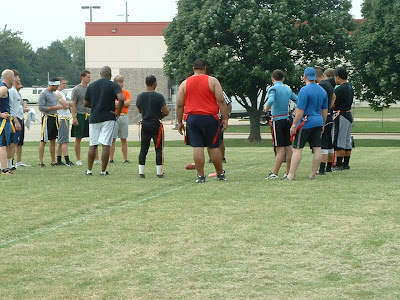 The meeting of the minds. The big guy in the red is Fui and he is one big Samoan. 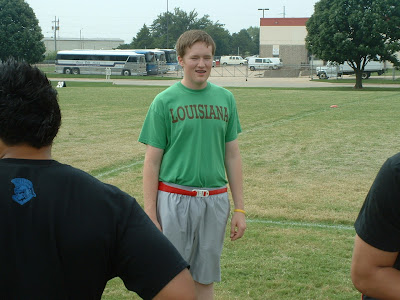 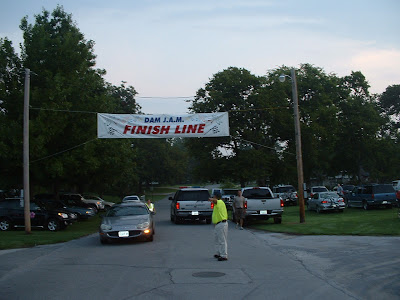 Saturday morning I also did the 56 mile DAM JAM ride in Pryor. This is a really neat ride and one I enjoy as the aid stations cannot be beat. The people are so friendly and have that small town feel. They remind me so much of the people back home. 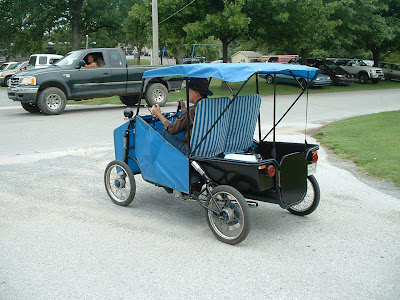 I have got to get one of these. This was some sort of electric car, but he was also pedaling it like a bike. You got me. 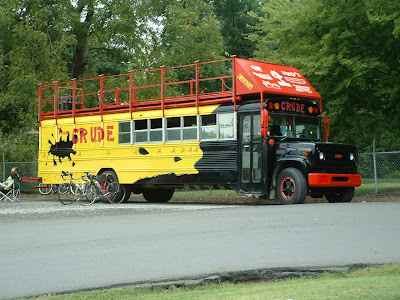 Team Crude bus was there blaring old hippie music. You have got to love this. These are my kind of people. 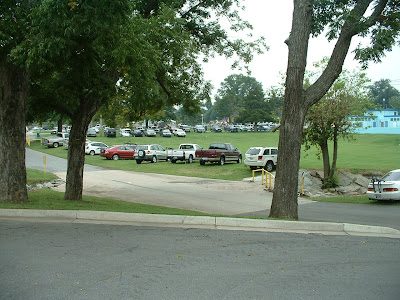 You can see the pool on the right and the mass of cars. I do not know how many people do this ride, but it is a lot. After this ride my legs were feeling pretty beat up. I have just rode easy this week on the trainer. Sunday during my run I aggravated left shin, so I have been taking it easy.

I also have a big announcement coming that will blog about in the near future. I do not want to do it now for lack of time, but it is huge and I am really excited about it. Have a great weekend!
Posted by tomdog at 11:34 AM No comments:

I woke up early on Saturday morning and decided to do the MS 150 training ride starting from the Westside parking lot. It was kind of an eery feeling being close to where the cycling fatality happened this past week. I cannot let it affect me, but you cannot help but think about it while riding. The ride of the day was a 50 miler and it was kind of soupy out with lots of humidity. It was looking like London as the fog was low and it was cloudy. We started out at about 7:30 and took off towards the 21st bridge. I was riding behind a friend of mine, Tim, when all at once a guy on a lazy bike, Recumbent, that is what my son calls them, got his bike caught in a seam and went down and took Tim with him. We had only made it a quarter of a mile and had already crashed. I stopped and helped him with his bike and he appeared to be OK. I think this kind of shook him up as he kind of hung back the rest of the day. I knew something was bothering him as he normally sets the pace and everyone else hangs on. I was going a lot of slower than planned, but I did not want to leave him behind. 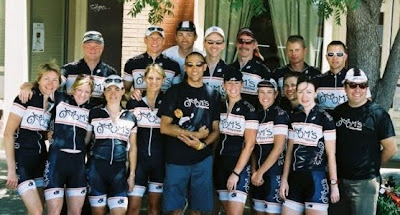 We turned and headed towards Sapulpa and a peloton of Tom's riders passed us. I did not even know that they had a team, but apparently so. I so much wanted to hop in with them, but I wanted to stay back with Tim. We stopped at the first rest area and come to find out he had hurt his knee and he told me to not wait up. I did just that and ended up pretty much riding by myself for the rest of the 50 miles. I got back to the Jeep and Julie was waiting as she rode her bike on Riverside, while I went on the ride. She did 12 miles and one of these days she will be able to keep up. 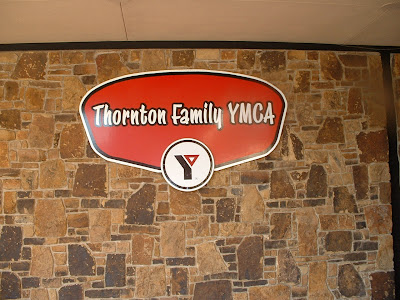 Sunday after church, I hopped on the bike and rode to the Owasso YMCA. I know this is a picture of the Thornton YMCA, but I forgot to get a picture of the Owasso one. After the 21 mile ride there, I hopped on the treadmill, which I rarely ever do, and did a 45 minute run. I did some short intervals and even got down to a 5:18 mile for awhile. It was kind of exciting to run that fast, but it still amazes me that marathoner's run faster than that over 26.2 miles. Truly amazing. While I was running, the kids were in the pool, so I finished up and headed to the pool and swam for about 30 minutes. Somewhat of a mini tri for the day. 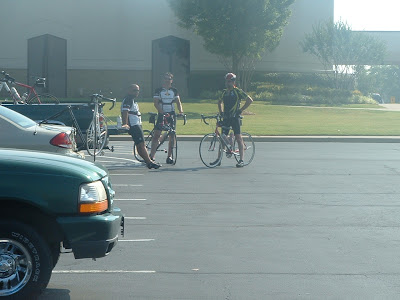 Today, the Church on the Move cycling group met at the Zoo and were going to Skiatook for lunch, about 38 miles round trip. I rode my bike from the house and added some bonus miles. I ended going faster than I wanted as Tim was feeling better and Lance Pitts led us up there. We averaged close to 20 for the trip up. We ate lunch at Subway and spent way too much time there. They are a great bunch of guys, but they waited for all the groups to come in and eat before we left. I think we spent at least an hour and 15 minutes in Subway before we left again. It was already heating up outside and I could feel it on the way back. Tim led the way back to Mohawk and we were flying. I peeled off on the backside of Mohawk and headed home. I was getting hot and just wanted to get home. I ended up with 100K for the day, not bad.
This was a good weekend of training and I felt really good. My heart rate does not feel elevated in the morning and my legs feel good. I trying to decide what to do this weekend. There is a Crit race in Springdale, AR on Saturday. I have never done a Crit race before and would like to try one before the season is over. My cycling has been good and I think I could do it. They have a Citizen category, so this should be less intense. Also, this Sunday is the Turkey & TATUR's 50K, which I have done the last three years. I am undecided, but that is typical for me. I will wait until probably Friday.
Friends of mine ran the New Mexico Marathon yesterday and the Colorado Springs Trail Marathon today. Crazy, but sounds like something I would do. Have fun this week and get outdoors!
Posted by tomdog at 3:59 PM No comments:

Something Has Got To Change