Can a Marathon Runner beat a 4WD Fiat Panda on the London Marathon Course during rush hour traffic? Watch the videos and find out.

I am really, really, really behind in my blogging duties. A lot of things have happened since I last posted in early October. I have just been so busy with life, that I have not had time to post. The last time I had posted I was just a few weeks back into my running schedule. I spent most of the summer training on the bike and had done very little running. A lot of this was due to the heat and I do not do very well in training without a goal in mind and I did not have goal races lined up. With the staggering summer heat here in Oklahoma, I decided to just do a lot of riding. I still ran a couple days a week and at least once in awhile, I did a brick off the bike, but my heart was just not into it. Slowly, but surely, that has turned around. 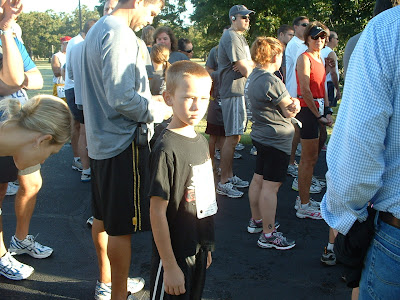 The next race that I did was the Tulsa Zoo Run. Wyatt did the 5K and I did the 10K. If Wyatt does not look happy, it is because he is not. He is mad at me for making him do a little warm up before the race. Sorry, need to get the blood flowing.

The Zoo Run is one of my favorite races in Tulsa as it is at Mohawk Park, which is flat, and we end up in the Zoo and can walk around the Zoo and check out everything for free. This is was only my 3rd week back running and the race did not go as planned. I maintained a steady 40 minute 10K pace, but towards the end, my fitness level, or the lack of it, showed up and I dropped off in the end. I still managed a 40:25, but it was not near where I wanted to be. 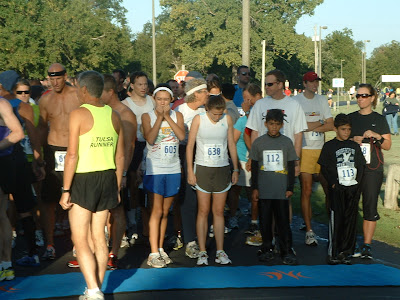 Here is the start of the 5K. 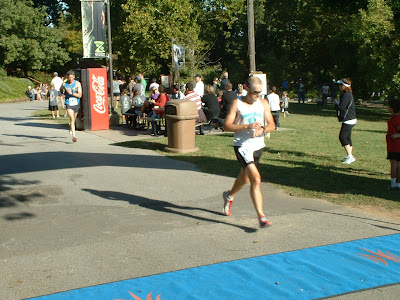 Here I am coming across the finish line. The one good thing about this race is that I beat John Stukey. You can see him in the photo behind me. He must have been injured as he is a lot better runner than that. 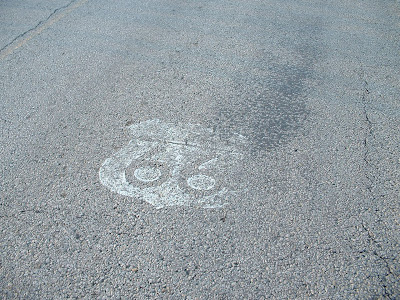 Next up was the Route 66 Half Marathon. I definitely was not up to the full Marathon, but thought I had a good chance at doing well in the half. I like the longer distances better and thought I would give it a go. This was a first year race and was happening on 10.10.10. How cool is that. Plus, I had the added benefit of running on old sections of Route 66. This was a point to point race and the half started in Baxter Springs, KS and ended up in Joplin, MO. The full Marathon started in Commerce, OK and went through Baxter Springs, KS and then on to Joplin. What a neat concept for a race.

The weather for the day turned out pretty nice for the half, but it would have been warm for the full. The one bad thing about the race is that there is very little shade and it can warm up quickly. There was about 800 runners in the half and after the the gun was fired we were off. I wanted to maintain a 6:40 pace as I thought that was achievable with my current fitness level. I ended up being able to cruise through consistently at about 6:39 pace and felt decent. We ended up going through a few smaller towns and the crowd support was phenomenal. I think most of the people in the small towns came out and cheered or handed out drinks.

The course itself was pretty hilly and from about a little past mile 5, we had at least a half mile uphill section. My pace slowed a little, but I still maintained a 6:45 pace. We entered Galena at about mile 9 and I was starting to feel it. I popped a GU and the crowd support really helped pick up my spirits, let alone seeing Tow-mater on the edge of town. Have no idea what I am talking about, check out the movie Cars.

After Galena, we got on an old stretch of Route 66 and started heading towards Joplin. This last section of the course was full of rolling hills and really pushed you to your limits. I was wondering at this point, when I was going to be in Missouri? Once I hit the main 4 lane heading back to Joplin, there was a little sign along the road that said Missouri. From there, it was about 3 miles to go. I just tried to maintain my pace, but it was slowing to about 7 minute miles because of the hills. I caught an 18 year old kid with about a mile to go and tried to put some distance between us. My experience has always been that you may pass them initially, but once they see the finish line, that youthfulness kicks in and they sprint past you at the finish.

We turned to the left down about a half mile flat road and it was time to kick it in. I dropped my speed down to about 6:10 and was able to finish up in 1:28. First Master and 8th overall. Not too bad for a race with about 800 people. 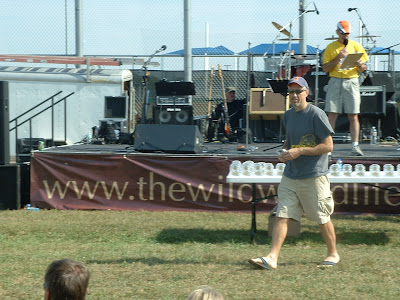 Here I am getting my nice trophy for the first Master. I was really impressed by the this race and the friendliness of all the people. This was a major undertaking on their part to do a point to point race through 3 states and they pulled it off. The people were so friendly and glad to have you there. Even at the hotel, they prepared food for the race participants. I will have this race on sights again next year as they were able to do a big time race and keep the small town feel. 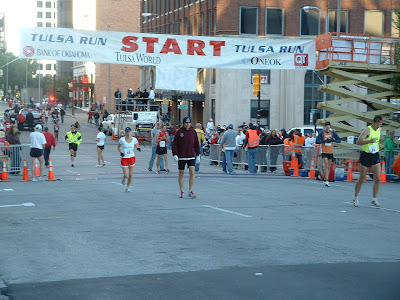 Three weeks later was the Tulsa Run. I end up doing up this race every year as my employer is one of the two main sponsors and we get in for free. This race I had an additional 3 weeks of training and felt good going into the race. My goal was get under the 60 minute mark and get one of the coveted Hillcrest cups, but the Denver hill at 13K, always looms in the background.

The weather was really cool and turned out be a great day for a run. I had qualified to be up front with the Elite start at the Zoo Run, plus I have the privilege of running on Brian & Kathy Hoover's Runnersworld race team, and they usually grant me an elite start through the team.

Julie had originally signed up for the 15K, but backed down to the 5K at the last minute. She can do so much more if she would just stick with it and keep focused. I really wish she had someone her speed to train with and keep her motivated. She could do great.

After the 5K'ers took off, it was time to line up. Since this race offers cash, several out of state runners come in to try and grab some training money. This usually gives me a chance to say that I have ran with the Kenyans, but usually entails me just lining up with them and watching them fade off into the distance. They are so fast, it boggles the mind.

At 9 AM, the gun sounded and we were off. I was trying to stay around 6:25 and hopefully bring it in at under 1 hour. The first 6K of the course is very hilly and it is easy to overextend yourself and not save enough for the end. I kept everything even throughout this section and was even about 6 seconds under my goal. The next section up to about 13K is flat on Riverside. This is usually where I have faded off in the past and I wanted to make sure and maintain a steady pace. Once we headed south on Riverside, we were in the wind. Everyone was trying to duck down behind other runners, but it didn't make a difference as the wind hit you no matter where you were at. We turned around at about 41st St and headed back to downtown at the BOK center. I was still maintaining a good pace and went through the 10K at right at 40 minutes. I kept it going until I hit the 13K mark on Denver and lost about 20 seconds on the hill. After the big initial incline, it still has smaller rollers and it is hard to get it back going again. Once everything leveled out and I was able to start getting a good rhythm going again, it was too late. I could still see the clock under 60 minutes, but watched it fade away in the distance as I crossed the line in 1:00:21. Oh, so close. 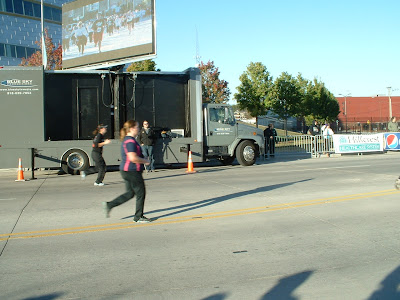 Here is Julie finishing up her 5K run. I wish I could have seen her come in and cheered for her. 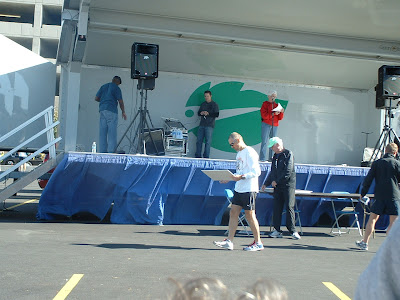 Here I am getting my cool award for 5th place in my age group. They gave us a cool print of the race that some artist had drawn. I really like getting something unique from a race as I like the medals and cups, but they are getting old.

Yesterday, I ran the Route 66 Marathon on a humid, windy day. I had a great race, but I will do a race report on it tomorrow.
Posted by tomdog at 11:53 AM No comments: