I was looking around last year for a new pair of running shoes and came across the new K-Swiss K-Ruuz's. I read several articles about them in the Tri magazines that I get and being that I dabble occasionally in Tri's, I was really interested. I am not your average follow the normal path that others follow kind of guy and I knew there was something about these shoes that intrigued me. I knew that K-Swiss had sponsored people like Mirinda Carfrae and Andreas Raelert to name a few pro triathletes, but other than that, I just knew them as a tennis shoe company that had been around for awhile. Nobody here in Tulsa carries these shoes, so I knew that I would have to take a risk and order them online. I do not like to buy shoes that I have not tried on, but I found a deal at runningwarehouse.com that offered free returns, so I thought, why not. So, this is my review. 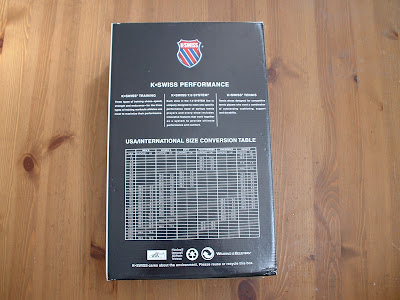 I entered in my information to their website and two days later, this appeared on my door step. Runningwarehouse.com has awesome two day free shipping and two days later I was the proud owner of a pair of K-Swiss K-Ruuzs. 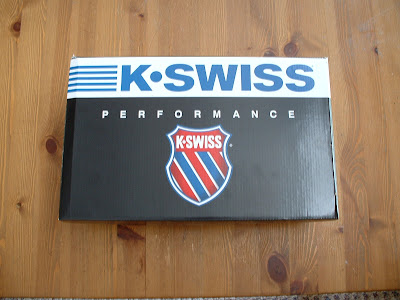 The box itself is pretty cool. I normally run in New Balance and they have a pretty plain looking brown box, but this actually had colors and I like the K-Swiss logo. 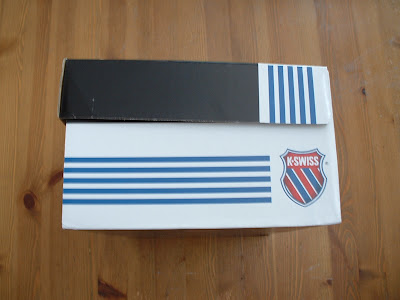 This view of the box made me feel like I was back in grade school and I was buying a new pair of tennis shoes. There is nothing wrong with that as it brought back great memories as child. I like old school! 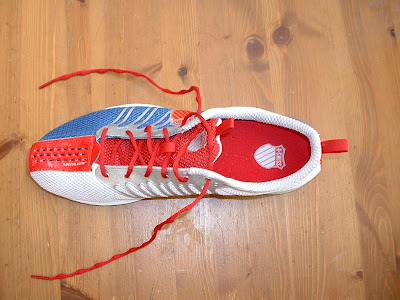 The shoe itself is an attention getter. It screams, "Look at Me"! The patriotic color pattern is awesome with the three colors of the red, white, and blue perfectly blended together. I remember running the Mother Road Half Marathon last year and when I went through a small town in Kansas, a guy on the sidelines yells out, "It's all about the shoes"! 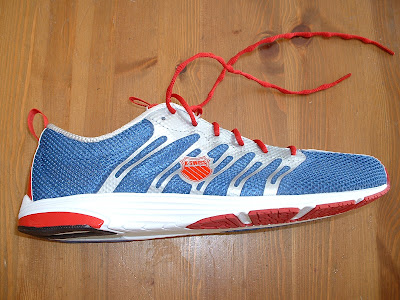 The main view from the outer side is the blue, which I think was a good choice, versus having the white as the outer. 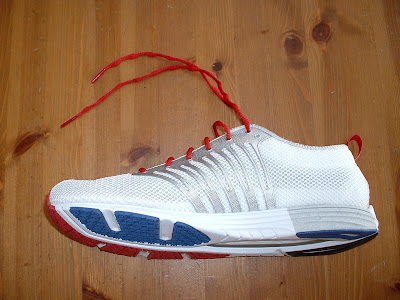 The white inside is fine, but it definitively is not an attention getter by itself. Put all three together and it works. 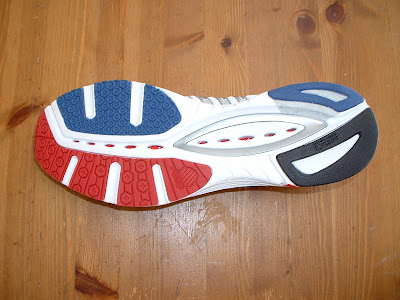 The bottom of the shoe continues with the Red, White, and Blue scheme. This is a racing flat through and through. Who needs wimpy gels or cushioning? 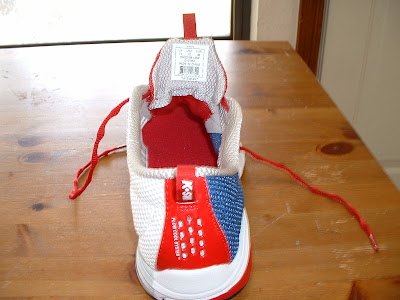 This shoe is made to breathe easy, wick away moisture, and transition easy from the bike to the run. Ease and speed is this shoe's mantra. 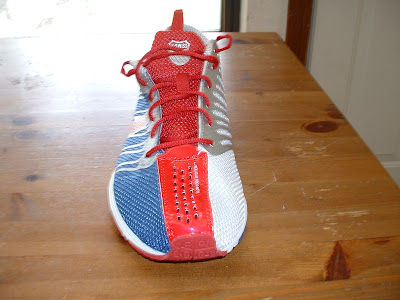 From the front it looks like a bad dude coming at you. It reminds me of the Ford Raptor that comes at you and looks like something out of a Maximum Overdrive movie. 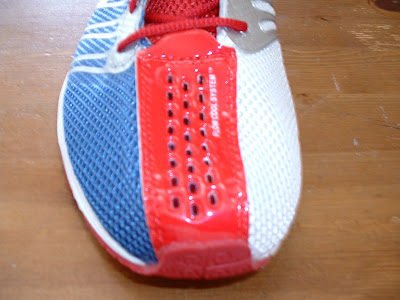 The front mesh is very breathable and allows for sockless running. 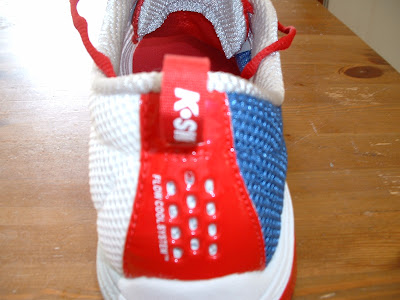 As you can see, this is like wearing a sock with a piece rubber on the bottom. Nothing as serious as Vibrams, but this is built for speed. 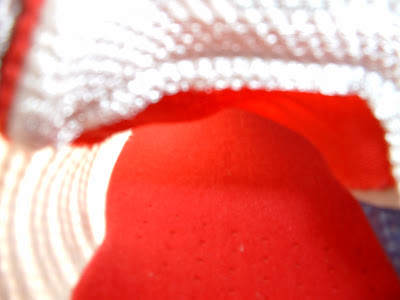 Very, very breathable. A lot of daylight comes through this shoe. 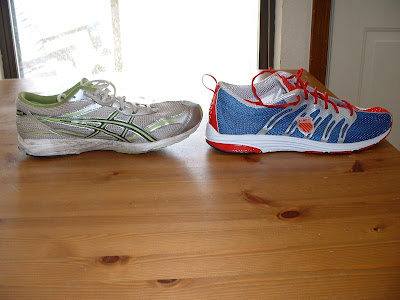 My last pair of road running shoes were the Asics Hyper-Speeds. A very good shoe worn by Ryan Hall. They were decent shoes, but the K-Swiss looks better. The Asics were very plain. 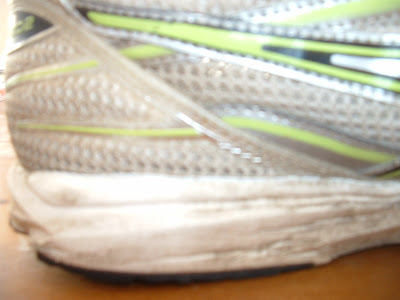 The close up of the back of the Asic shoe shows that you are not getting very much under your heel. 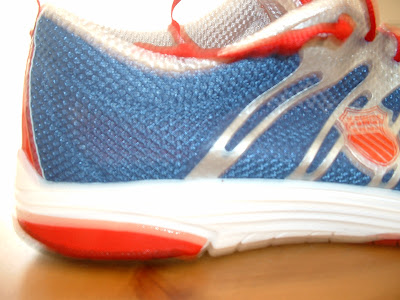 In comparison, the K-Swiss has a 20mm heel and 10mm drop from heel to toe. They still have a slight drop and are not like the newer shoes that are having no or very little heel drop. The weight on this is supposed to be at 7.1 oz's. Very light, but that is the way I like it. So, enough talk, time to take them out for a run. 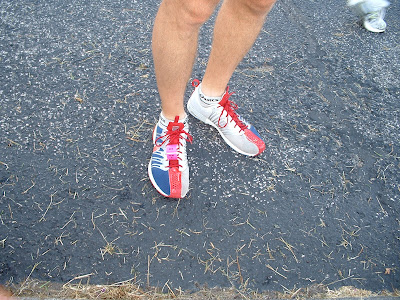 Don't they look nice? So how did they fair? 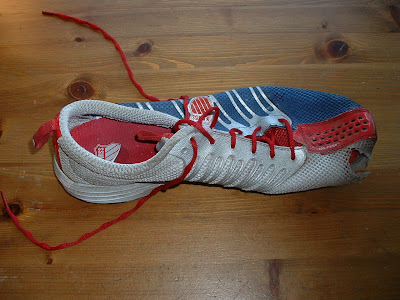 Well, after 1,300 miles. Yes, that is correct. 1,300 miles in a racing flat. This is my normal running shoe, not just my racing shoe. I train in this shoe all the time. I do not believe in using a lot of cushioning, but that is another blog. 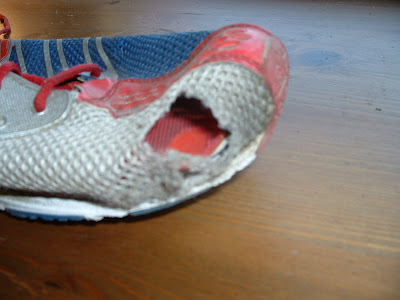 The biggest issue I had was my big toe ended up blowing through the side. I think the rest of the shoe held up fairly well in spite of all the mileage. 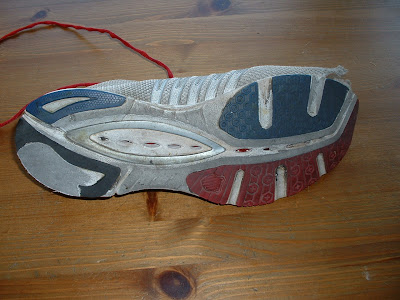 The bottom of the shoe ended having part of the black rubber piece on the heel come off. The rest of it, looked fine. This is the left shoe. 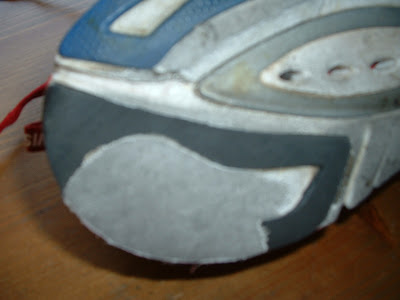 This is a closer view of the heel. Even without this piece, it was fine. I don't want the cushioning anyway. 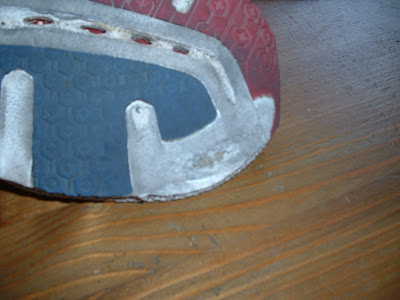 On the right shoe, the front part of the shoe starting digging a groove into it. This is because I tend to pronate a little bit and I definitively put a little bit more pressure on that spot. It still worked fine. 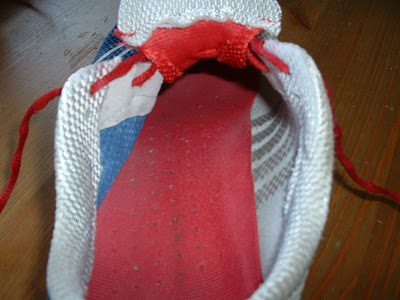 Inside the shoe, it still looked great. I thought that it would not be built solidly enough with the additional breathability that the shoe has. Kudo's to the team for designing the stitching so that it held up to my 1,300 miles of wear. 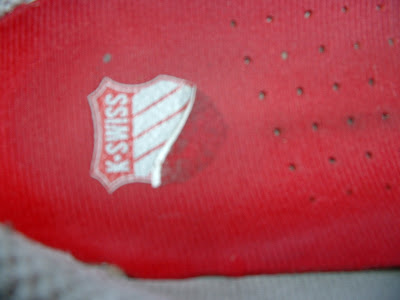 Amazingly, the K-Swiss sticker inside the shoe was still intact. A little bit peeled, but still there. 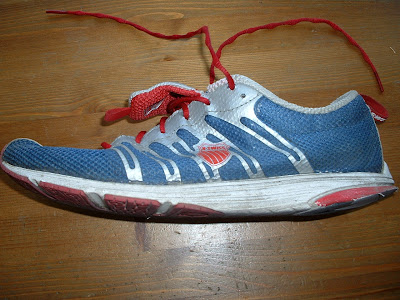 The outside of the shoe still looked good. From this side, it still looked OK. You just can't see the hole on the other side where my big toe was sticking out. 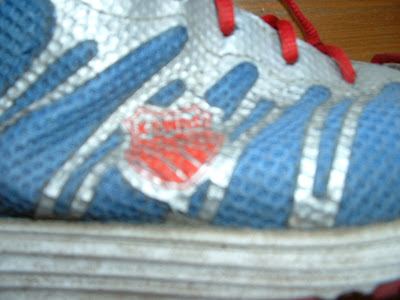 Even the little K-Swiss sticker on the side of the shoe was still there. Amazing shoe.

Overall, I really liked this shoe. It has carried me through treadmill speed workouts, training runs, and from 5K's to Marathons. Yes, I have ran Marathons in these. I probably have ran over 20 races in them if I went back and checked. I would recommned this shoe to anyone. Is it for everyone, maybe not? I think if people really dug into the importance of proper footwear selection to maintain full tendon and muscle usage during running, they would check into this shoe and others like it. I would recommend it and I have got great use out of it. A great entry for K-Swiss into the running shoe market.