As the leaves are brown and the sky is gray here in Oklahoma, cyclists are gearing up for the

Amgen Tour of California. Lance is competing in the race back here on American soil after doing a mediocre ride in Australia. He is going to have his work cut out for him as this race is bringing out some big talent, such as Tom Boonen, fresh off his win at the Tour of Qatar and his return to cycling after testing positive for Cocaine, http://sports.espn.go.com/oly/cycling/news/story?id=3436911. This also marks the return of Floyd Landis after his being banned for two years for doping after winning the Tour De France. http://sports.espn.go.com/oly/cycling/news/story?id=3029089. See a trend?

I have read Floyd's book and it is a great book about his life growing up as a Mennonite to become the winner of the Tour De France. It is a quick and easy read, but one worthwhile as it gives incite into his training and what he did to get to the top. He also covers his relationship with Lance. Whether you believe him or not about the doping, it is a worthwhile book.

I am more interested in Lance's return and see what the 37 year old Lance can do against the young guys. I just hope that he is in the shape he needs to be in and does not embarrass himself. Greg Lemond tried to come back to the Tour De France after retiring and left the race in the 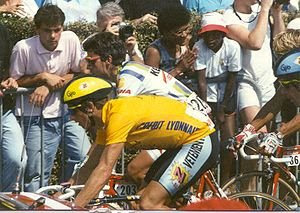 team car part of the way through. People remember that image of him and not the ones of him on top of the podium being the first American to win the Tour De France. I hope Lance does not do the same. I think he will do whatever he can to not look like Lemond as they do not like each other at all. Greg thinks he is doping and has been very vocal about it. I think that unless he has proof, he should just shut up and not be ticked off about he finished his career.

You can check out more about the Tour of California at http://www.bicycling.com/home/0,6608,,00.html. The Versus channel is covering the event and you check out their schedule at http://www.versus.com/tourofcalifornia. Enjoy.
Posted by tomdog at 9:00 AM No comments: