Book Review: A Life Without Limits by Chrissie Wellington 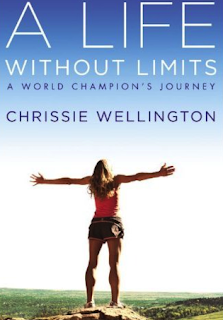 It has been awhile since I have done a book review, but recently I had the privilege of reading the much anticipated book, "A Life Without Limits" by Chrissie Wellington.

For those of you unfamiliar with this outstanding competitor, she is a British athlete who burst upon the Ironman triathlon scene in 2007 and it has never been the same since. Her dominance is one that she is undefeated at any Ironman length competitions, which includes winning the Ironman championship in Kona, HI  four times. Her ability to come out as a virtually unknown Ironman competitor and dominate the field like she has, has been unprecedented. This book is the tale of her journey from youth to where she is today.

If you are anything like me, I really enjoy a good book that motivates me, but also gives a glimpse into the person's life and daily training habits. This book does not disappoint. The honesty that she gives in this book makes me wonder if I had to write my own autobiography, would I be that honest? In a day and age when people unfortunately form negative opinions about others based upon their exploits, Chrissie throws all caution to wind and lays everything out there in a take it or leave attitude. I for one appreciate her honesty and think it is a breath of fresh air and one that does not change my opinion of her one iota.

She starts out by taking us back to her early life growing up in the U.K. and tells us about the pressures that she felt growing up and her problems with her self image which led to bouts of eating problems. She covers the stress that it placed on her family and how that through it all, she has survived and how that life can be better. This gives us a good foundation into what shapes her as adult, but it does not limit her ability.

Off to the college years of being an industrious student and trying to achieve well, you can start to catch glimpses into her competitive nature and that same tenaciousness that is to carry over to into her later triathlon career. I find it amazing in my own life how some of the destructive nature and the excesses that I used to have are now replaced with more positive influences and behaviors, but the drive or passion is still the same. Chrissie is no different in that our personality types are all unique, but a lot of us in the endurance sports world tend to have that inner drive that is there before we discovered sport, but we had used it in unproductive channels.

After school, like the rest of us, it was time for a job and the quote, unquote, "real world". As it is with most of us, the work we perform tends to the pay the bills, but it lacks fulfilling a purpose of doing something that matters. Not all jobs are that way, but the statistics show that the majority of people do not enjoy their work and would like to do something else. I have been there and so have most of us. Chrissie took that matter into her own hands and combined the purpose of making a difference with a career and took some positions that did not necessarily provide the living standards that some would require, but to her it was the ability to help others that made the difference. Eventually all of us have to face that same issue at some point and I agree it is easier when you are not married and have the responsibility of children, but a lot of times we are locked down by fear and the unwillingness to step out on faith. I personally appreciate and I am inspired by her boldness to do things and not be kept back by what others think.

Eventually, she stumbles across triathlon after growing up swimming and riding her bike all around Nepal as an adult and realizes that after a few competitions that she is pretty good at it. This draws some attention from some people to where she is hooked up with the legendary coach, Brett Sutton and his Team Bike Boutique training squad. The insight into some of her training regimes, dietary habits, and how the coach was able to transform her mentally into the champion she is today, is fantastic. I like to read for inspiration, but I also want to learn and apply those principles that work for others into my routines. I do not believe we have to re-invent the wheel and we can learn from the past experiences of others and I believe that Brett Sutton was able to apply those same principles.

From there the wins come, including Kona, which changed her life forever. Unfortunately, that also changed her relationship with her coach and eventually separate ways were parted. Chrissie then takes us on her journey to finding new coaches, moving to the endurance capital of the U.S., Boulder, CO, and developing her relationship with fellow triathlete, Tom Lowe. This is an amazing part of her life as we tend to think that sport champions are immune to some of the issues that we mere mortals face, but her insight into her struggles that she had past her first Kona win are incredible. I will not spoil a lot of those stories, but it is worth the price of admission to read about what happens.

Last, but not least, being the true champion she is, the next to last chapter she dedicates as to what she deems as true Heroes of Ironman.  This covers people who have suffered more than a lot of us have and some who have paid the ultimate price, such as Jon Blais. Her iconic finish roll at her Ironman's are testament to the courage that Jon faced and how his legacy continues to roll on. You can check out more about his foundation at this website: Blazeman Foundation for ALS. Jon is just one of the amazing people that she mentions in this chapter of dedication.

After her 2011 win at Kona, Chrissie decided to take the 2012 year off and dedicate herself to helping her causes and being a spokesperson around the world. From what I can see, she has been a great endurance sport ambassador by bringing her infectious smile to millions around the world. I am glad that she took the time to write this book and I am even more curious as to what the next chapters in her life will be as they have yet to be written. As with most of us, we will be waiting.
Posted by tomdog at 12:10 PM 1 comment:

Well, it is official, I have been accepted into the 2013 Boston Marathon. I have debated for several years on whether to register or not. I have qualified 4 times, but I have always felt a check in my spirit that the timing was not right to do so. The first year I qualified we discussed it as a family and thought we had plenty of time and bam, 9 hours later, it was closed. Fortunately, the staff behind the Boston Marathon revamped their entry process and it has changed the process tremendously. This year I was able to register on day 1 at 10 AM EST. My confirmation on my qualifying time was done later on that afternoon.