After being offline for over a week, due to some Malware that got on our computer, I am now back on line. It really irks me that these people, who have obvious great technical abilities, decide to use it for bad instead of for good. Instead of applying their talent to the greater good of society, they decide to use it for evil. Really a sad story about the demoralization of society. Pretty heavy stuff.

We had our first meeting for the 360 Sports bike team and we have a few races lined up for this year. Some are the obvious ones, like the Tulsa Tough, and some are new, like a new crit race in Owasso in August. I will still run during my time of cycling as my love of running will always be on the forefront for me. I will have to concentrate more on the cycling, but I will still run. I would like to sneak in a few races in this spring or maybe even an Ultra. I will do the Sweetheart run in Feb and attempt to go sub 19 in the 5K. I may also double up and add the 20K for kicks. I am still up in the air with the Post Oak trail run and then I may do the St. Patrick's Day 5K. Other possibilities are Lake McMurty in April or the OKC Marathon in May. We are having our first 360 Sports Tri/Bike club this Saturday and I may change my schedule based upon what the group is doing. I know they are looking at the Leadville 50 in August. That may go on the race schedule.

The biggest news is that I finally got a job to where I can be at home at nights with the family and lead a somewhat normal life. Whatever that is. I have always worked odd shifts throughout my career and for our last six years in Tulsa, I have been on second shift. I will be moving to the Mortgage division of Bank of Oklahoma and be embarking on a new adventure there. This is great news as my current position is slated to be eliminated this summer. God is so good that I do not have to worry about getting downsized, but instead I get a new day shift position with a pay raise. We are so blessed.

There have been some great reads on other blogs, like Geoff Roes, to where people are posting anonymously and are having to be screened. It is great for people to voice their opinions, but it is still hard to not take things personal or really limit who posts on your blog. I understand completely what Geoff has had to do. You check it out here.

This is just a quick update as we have been offline for awhile. Life is such an adventure and I relish what God has planned for us next. Maybe it is time to step out in the ministry? Hmmm.
Posted by tomdog at 11:23 AM 1 comment:

It's official! I have been accepted to be on the 360 Sports cycling team for 2011. 360 Sports bike shop is a locally owned bike shop in Owasso that is ran by a great guy, Jon Ray and his family. They been open a few years and have decided this year to sponsor a race team and when I saw that, I couldn't resist to throw my name in the hat. And to my surprise, I was picked to be on the team. 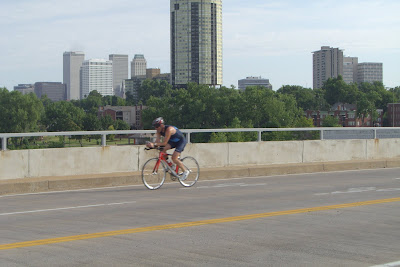 I don't have a lot of racing experience on bikes. I have done a number of Duathlons and a few Triathlons just to prove that I can survive the water. I am more of a dry ground kind of guy, but I have been known to venture into the water. There is still something about Triathlons that intrigues me for the future. Maybe it is the lure of the Ironman? 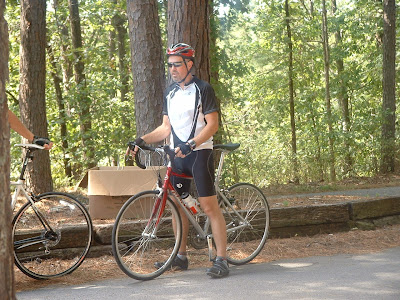 I did do the Oklahoma Road Race Championships this last year and managed a 5th overall. This was only because a neutral was called towards the finish because of a crash. I was just getting ready to pass a guy to go into 4th and then go after 3rd, when it got called. Maybe next year.

There is something electric about being in a big group of bikes inches apart going over 20 mph. For me, it is really a big adrenaline rush. The excitement of going fast and the danger of being in a peloton all at the same time is exciting. Where as running is more of a solitary endeavor, cycling truly is a team sport.

So what does this mean for me for 2011, I am not for sure? We have our first meeting next week to discuss the 2011 race calendar and what key races we will target. That will help me plan what goals I will set for for this upcoming race year. My commitment to the team is for a minimum of 5 races to fulfill their requirements. That will not be a problem as I like to race.

So what does this mean, will I not be running this year? Not at all. Running is something that I can never see my self not doing. Even when I will have to concentrate more on cycling to get better, I will still run several times a week. I may even throw in an occasional swim just for kicks. Why, I am not for sure. Once we have the meeting and plan the year, I can make my plans around what commitments they require. In the mean time, this is going to be an awesome year and I look forward to trying something different. After all, that is how we grow to be better than we were the year before.
Posted by tomdog at 9:47 AM 1 comment:

It's been awhile since I blogged about anything worth writing about. It is not that a lot has not happened, it is just things have become a blur. Life is so short and every moment so precious, that it becomes harder and harder to be able to do everything you want to do. This means that some pruning of things in my life needs to take place to make sure that the priority things get taken care of. TV is probably the biggest time waster there is. As I was walking by a TV on at the gym today, it said that the average American spends 34 hours a week watching TV. How sad. I know there are several other things that are time wasters, but I know TV is one of the biggest. But, that is enough of that for know as that will be a future blog. So what has been going on? 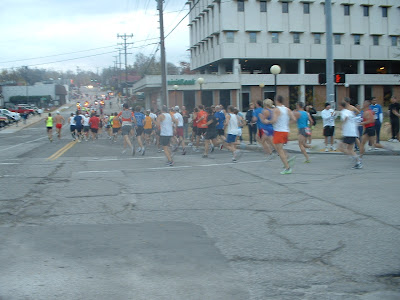 For the 5th year in a row, I ran the Route 66 Marathon here in Tulsa. With weather conditions here in Oklahoma, you never now what it going to be like. It ended up being muggy and very windy. Hurricane force is how one person described it. Not exactly, but strong enough to slow all the times down. The course was also changed once again this year. I think it is the 4th change in 5 years. I am not for sure why. At least this year they went to corral starts and that allowed me to get out early from the slower runners.

I really like how the new course winds through downtown and gives people an opportunity to see the sites of Tulsa. The actual worst part for me is on Riverside to where it is flat and boring. The problem this year was you hit Riverside going south directly into the wind at about mile 14.5 and had about 6 miles of strong winds. That really took the wind out of my sails or put it in. Pun intended.

I had went through the half at 1:31 and felt pretty good, minus the buckets of sweat pouring off of me because of the humidity. I had wanted to run at least a 3:05, but once I turned on Riverside, my chances started to drop. I tried ducking down behind some of the half marathoners until the turn around, but close to 41st, you are on your own. My splits started dropping down to 7:40 miles and slower at that point. At the turnaround, it was all hang on and just finish. The wind had really beat me up. I held it all together and pulled in a 3:14. Good enough for 18th overall and 2nd in my age group. 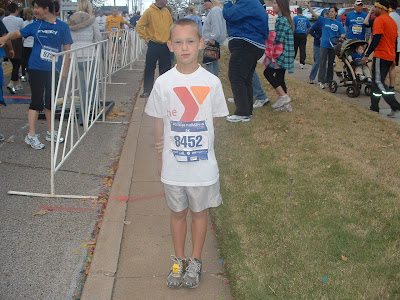 Wyatt ran the 5K that was held in conjunction with the Marathon. He managed a 2nd place in his age group. It was a good day at the races for the Dorothy family. 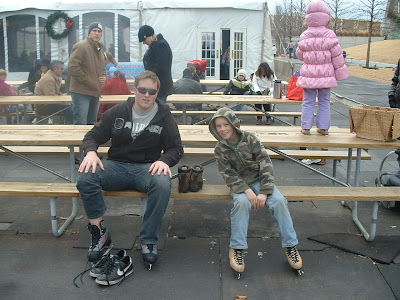 I was on vacation this last week and took the boys ice skating at the BOK Center before it closed for the season. Will had played ice hockey for 3 years and was not impressed with the condition of the ice. I guess they don't know how to use a Zamboni. 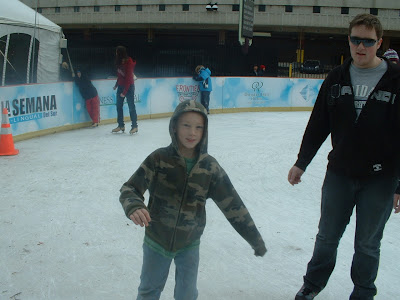 This was Wyatt's first time skating and he did really good. He only fell twice. He decided that was enough for the day as we had a race that night. Almost every year we do the Race into the New Year on Riverside. It is a great race put by Runnersworld running store. The best running store in Tulsa and one that I am honored to run for. The concept is to start running in one year and finish in the next. Unless you are Kyle King and run a sub 15 and finish in the same year.

I wanted to race it hard as I had been running good and thought that a sub 19 may be in the cards, but with the wind and the lack of being able to see, it didn't happen. The temps were around 20 degrees and the wind chill was in the low teens. Not bad for Illinois weather, but brutal for Oklahoma weather. At exactly 11:45 the gun sounded and we were off. I let the young guys go ahead and stayed at a steady pace with some of the lead women who were complaining that they could not see the road. Duh, it is almost midnight.

We start on the Westside trail, go up a little incline, head East across the Arkansas river bridge and head south to about 17th Street, turnaround and head home. I was running decent and from what I could tell, I hit the first mile in 6:09 and was feeling OK. On mile 2 is where we headed back into the wind and our times slowed again. Going across the bridge I think I hit the 4K mark at 15:33 and knew that sub 19 was gone. I ended up running on the Westside trail again while the fireworks were going off, so I knew I was still doing good. I ended up crossing the line in 19:26 by my Garmin. Good enough for 11th overall and first in my age group. Not bad for their being about 600 runners and the poor running conditions. I still believe that sub 19 is there for this Spring. 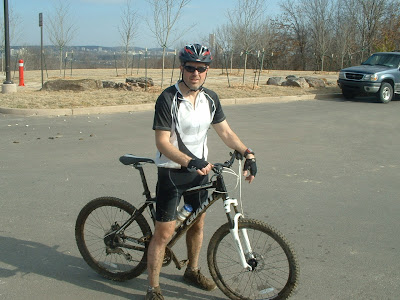 After resting up on Saturday and just riding the bike on the trainer for an hour, we headed to Turkey Mountain after church on Sunday and I went Mountain biking while the rest of the clan hiked and ran. I have had a love and hate relationship with Mountain biking, but yesterday was good day and it may be something to explore in the spring. I did a little over 10 miles in 1:16 and did not crash once.

Today was a 4X4 minutes interval workout on the treadmill at 6:03 with 3 minutes rest in between. Now it is time chill a little before going back to work. Have a great day!
Posted by tomdog at 10:42 AM 1 comment: