A few weeks ago, I was able to attend the Chris Brown Duathlon at River West Parks. I have done this race the last several years and had decent success last year by nailing second place in my age group. It is a 5K run, 30K bike, followed by another 5K run. Since it is held the last week in July in Tulsa, you can plan on hot, muggy weather. I signed up for the race knowing that I had not trained properly for the speedy 5K's that it requires to do well. Every time I ran during the month of July, I felt really burnt out. Like my heart really wasn't into it. I thought maybe it was the heat or I just needed to do something else for awhile. I did not like the feeling that I did not want to run. I have always loved running and have since added cycling and swimming. Running has always been my bread and butter. This was my mindset going into this race. I was really looking forward to the bike and not so much to the run, but why let that stop me. 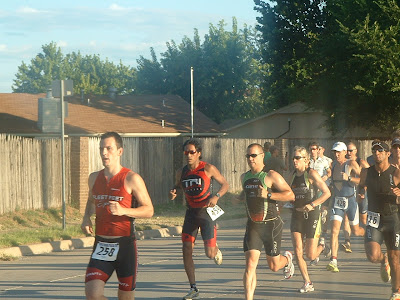 As expected it was hot and muggy. We lined up as usual in the road to head up to the 21st street bridge and then veer off south on to the Westside trail to loop back to the transition area in the festival parking lot. Part of the trail was closed and they had to make adjustments for this years race. We ended up going back North on the trail to a second turnaround before heading back to the transition area. The more turns, the more frustrating the course, but what can you do?

I started out at a fairly decent pace as I did not want to do my typical go out too fast pace and hang on for dear life run as I had a bike and another run to follow. I ended up running in a group with Steve Lee and Hugh Dunagan. We all stayed together pretty good with me setting the pace. The Westside trail is flat, but has a few undulations. The first 5K was pretty good, but I wanted a little faster time, but I wasn't feeling it. 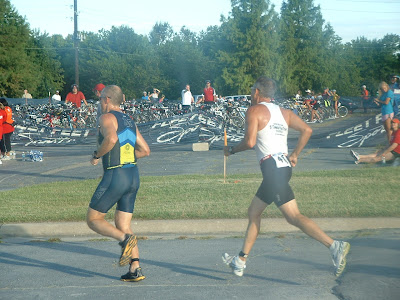 Here I am coming back into the transition area followed closely by Steve Lee. First 5K done in 20:25

Now was the time for me to shine with the bike. Last year I managed a 22.4 mph average pace and felt confident going into this year that I could equal it or do better. My heart hasn't been into the run, but my cycling has been going good, so I had high expectations.

I made it out of the transition area and headed across the 21st street bridge to veer on to Riverside to do 2 loops. One thing I like about this race is that they close down all car traffic on Riverside. We have the entire road to ourselves from 11st to I-44. Awesome!

I headed out and felt good, but it felt like my front brake was rubbing. I thought about stopping to check it, but did not want to lose that much time and just kept going. I felt OK on my exertion levels and was passing quite a few people. I did get the occasional pass from the guys with the big butts and disc wheels. Must be nice to drop that kind of cash to go a little faster. Maybe when the kids get out of the house.

The 2 loops were pretty uneventful and before I knew it, it was time to head back into transition. Bike leg complete in 51:01 for a 21.9 average. Not as fast as last year. 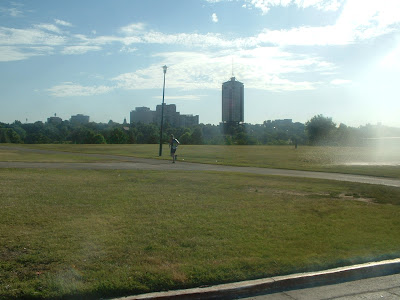 Here I am heading out for the 2nd and last 5K. That is not an issue with the camera on the right side of the picture, but sprayers they were setting up by the fire department.

I had not practiced running off the bike for awhile as I stated before, my heart hasn't been into running lately. I definitely felt it off the bike. I felt like I was dying, but I still was managing a decent pace. At this point it was hang on for dear life and just finish. 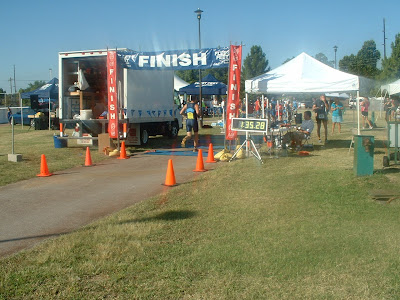 I managed to get across the line in 1:35:32 with a 2nd 5K in 22:15. Also, a little slower from last year. It was starting to warm up at this point and I was just wanting to get in the shade and drink some Gatorade. I ended up 24th overall and 5th in my age group. I was about 2 minutes faster last year and that probably would have got me an award this year, but with 5th in my age group, no dice. I am still glad I did the race and at least I did not have to wait around forever in the sun for my award. It was still another great day outdoors, being able to race, and experience life. Great to be alive! Results can be found here.
Posted by tomdog at 8:18 PM 1 comment:

Life has been very crazy lately and my blogging has severely fell behind. Not that I am trying to make any excuses, but it is a matter of life choices. Obviously, I chose to do other things beside blog. I am going to try and catch up on some things that have happened since the last post. For this post, I am going to concentrate on the kids race they had a few weeks ago. 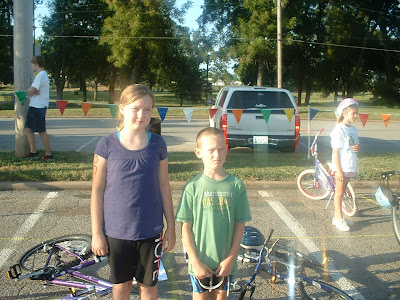 At the end of last month, the kids had an opportunity to do the 13th annual Tulsa Parks kids triathlon. This is a very low key and kid supportive race put on by the Tulsa Parks crew at McClure park. They offer a long and short course race with the main emphasis being on participation. My kids have done the race the last three years and they both decided to do the long course, 150m swim, 2 mile bike, and 1 mile run. Here they are getting set up in the transition area. 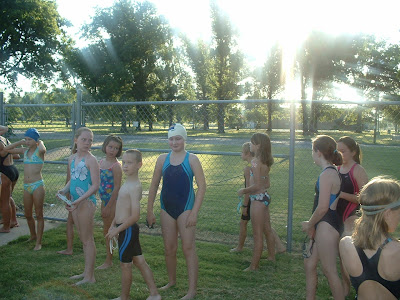 Being a typical Oklahoma July day, it was hot and muggy. I am sure the swim felt pretty good. The long course goes first and they line them up according to race number. After they start the first kid, they kick them off every 10 seconds. I was not worried about Shannon's swim as she is on the swim team for Swim Tulsa, but Wyatt dropped out of Swim Tulsa and has not been doing much with it over the summer. 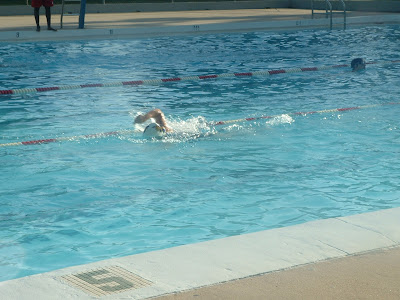 Shannon started first and had a really nice freestyle stroke going in the water. 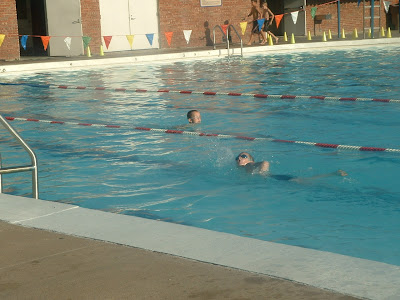 Wyatt started next and it showed immediately that he has not swam much lately. He was trying to do a freestyle stroke, but he would not keep his head down. I was not for sure if he was going to make the 150m. He managed pull through it by making the shallower end and then hanging on to the ropes to help guide him along. 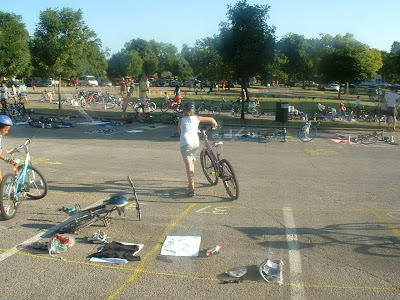 Shannon was first into the transition area and got her bike to head out on the 2 mile course. I bet Will that Shannon would be the first one back into transition with the loser doing the dishes. Shannon has had a strong bike in the past, so I felt pretty confident. 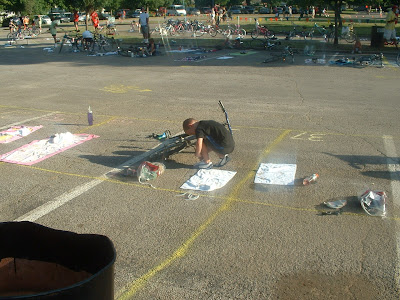 Wyatt was next in transition to head out on the course. I knew that he would catch her on the run, but I thought she would hold him off until the run. He is a great runner as he did a 6:18 mile in a race at age 7. 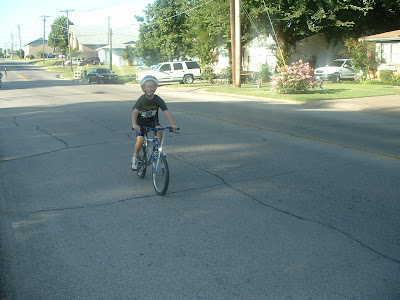 Well, I lost the bet. Wyatt passed her on the bike. He had a big smile on his face and told us as he went by that he beat her.

Shannon came in next and she was ticked. The photo does not show it well, but she was not a happy camper, plus she had to run next, which she does not like.

Her comes Wyatt sprinting towards the finish in a time of 26:40. Great job Wyatt! 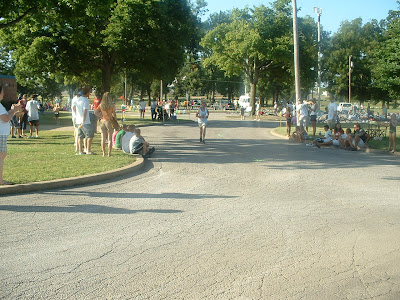 Next was Shannon hitting the line in 32:15. She was not happy that she got beat by her brother, but she still did great.

They had several kids at the race that were part of some Tulsa Youth Triathlon team. I am not for sure who they are, but it seemed to be all the Tri Mettle team's kids and appears to be not open to the public. I am on their Facebook page, but it really does not have any information. Too bad, as it seems like a great thing for all Tulsa kids.

I am really proud of the kids being in the race and no matter how fast their time was, they still had fun. I always tell them before any race, that the main thing is to have fun. Sometimes, I need to take some of my own advice. The results for the race can be found here.
Posted by tomdog at 12:22 PM No comments: