I have finally decided to sit down and write my race report from the Ozark Valley Triathlon over by Wedington, AR. The last several weeks have brought some challenges and time has been impacted. First, I got a letter from some lawyers back home that my Step Grandmother had passed away and I was in the Will. Nice of someone in the family to let me know about it. Will was driving our van, which we had for a month, and got into an accident and totaled it. Thank God no one was hurt as Shannon was in there with him. I then attempted to do the Tulsa Triathlon and 4 miles into the race on the bike, my front derailleur snapped off. Race over. Last, but not least, our air conditioner died last week and we spent the entire week without air during the hottest week of the year so far. Nothing like a lot of challenges to make you stronger. To try and redeem myself, I signed up for the Tri over in Arkansas.

We decided against getting a room the night before and got up before the crack of dawn and drove over to Lake Wedington. The drive was not bad as it only took about 1.5 hrs to get there. Not much action on the drive over, but when we got to the Turnpike to pay, they had no one manning the overnight station. You had to use all change or get change from the changer to pay. Luckily, I had a few dollars for change and was able to pay. I guess this is part of the State Cutbacks? The rest of the time was spent trying to stay awake. Although, when we went past the Casino on the border, a car with a bike attached, obviously heading to the race, went whizzing past us, and at 5:30 AM, a police officer pulled out and headed their way. Hopefully they still made it to the race on time.

We made it to the Lake by 6 AM and did the packet pick up, headed to transition to set up, and sat around getting ready. The transition area was monitored very closely and had very specific instructions. All items had to be to the right of the bikes. I heard several people getting called back to transition as they did have everything set up properly. I am not sure if I liked the total control or not. Any way, by 7:30 it was time for the pre-race meeting and then last minute checks before the swim started. 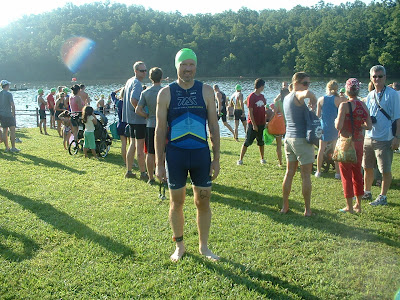 The Lake was isolated to the area and we had absolutely no boat traffic and had the Lake to ourselves. It was the typical wave starts and I was to start at 8:05 in the second wave. I have been working on my swim and made some modifications and was curious to see how I was going to fare. My last swim at the Tulsa Tri was in choppy water and I lost several minutes trying to re-attach my chip as it got knocked loose during the start. I finally had to decide to keep moving or let it sink to the bottom of the lake. Because of that, I had a really slow swim time, not that I am fast any way, but loosing several minutes, just compounds the issue. 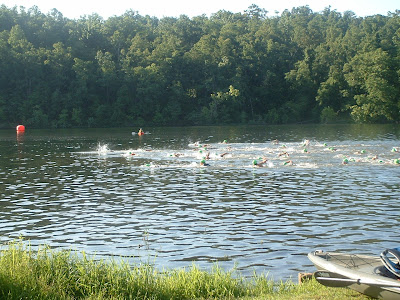 The swim was a 1,000 yard swim and the water was calm with the only problem being that we started swimming directly into the sun and you could not see the buoys. I had a horrible time sighting at the Tulsa Tri and lost several minutes as I am sure that I swam more than the 1,500 meters. At 8:05 we were off. That is me in the picture, the third from the left, no not that one, the other one.

I started out pretty decent and before I knew it I was around the first buoy. I passed several people and felt like I was going good. At the Tulsa Tri, I didn't pass anyone. As I started heading West, I passed several people from the first wave, Males under 40, and that lifted my spirits. I am not a great swimmer, yet, to actually pass some people was pretty cool. I made the last right hand turn around the buoy and headed towards the shore. I was going to make it. 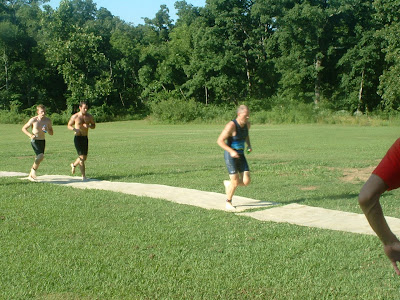 I got out of the water and started running on the long carpet towards transition. I passed several people walking, while I ran by. Come on, it is a race! My swim time was 22 something, which is a little faster because of some modifications I had made in swim technique. Time to get on the bike and head out. 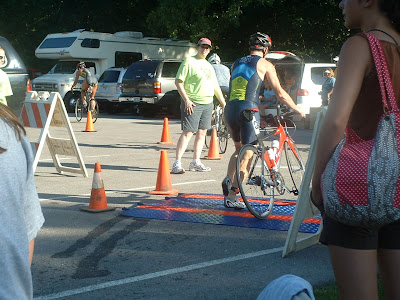 I got everything loaded up and headed out of transition. We were told that that we had two no passing zones coming out of the park and we had to obey or be disqualified. I hung back a little as we got out on the road and I heard, "On Your Left", so I guess we were out of the no pass zone. I was like, "Heck No", and took off and passed the lady and never saw her again. The bike loop was a 19 mile loop through the countryside around the park. It had one major hill that was not real long, just steep. I was passing a whole lot of people on the bike because of my slower swim. I passed one guy on the bike and he said, "Go on and git ya sum." That definitely brought a smile to my face as all I could think about was banjo's and Deliverance. My cadence increased after that.

Only a couple of people passed me towards the end and a lot of that is because I am not that great of a climber, but on the flat sections, I can fly. There was several little rollers and they would pass me on the hill and I would reel them back in on the flats. Before I knew it I was back in transition and time to get the run on. I ended up averaging 21 mph. Not bad, but I always feel that I could have went faster on the bike when I finish. 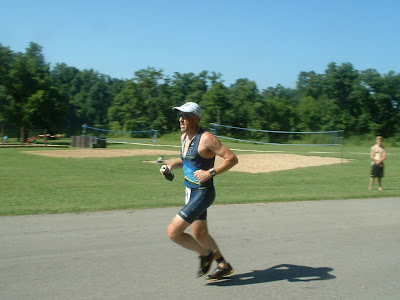 I made it into transition and switched into running shoes for the 4 mile run. My right insole on my shoes bunched up, and I tried to fixed it three times and just decided to go with it as I was losing a whole bunch of time. I headed out on the run and I was not feeling it. My time was not bad, but the legs weren't feeling the love. I made it to the start of this monster hill and managed to run it part of the way up, and started an Ultra power walk up the hill. I do not walk hills in races, unless they are Ultras, but this hill was killer. I did not see anyone running it. I finally made it to the top and the turnaround and headed back downhill. We have the huge downhill, a slight uphill, and then loop back around to the hill again. That's right, it was a two loop course with the same hill. That's sucks! So, I power walked again. Some were still try to run it, but my Ultra walk was just as fast. I made it up again and back downhill to the aid station and then uphill to turn right to home. 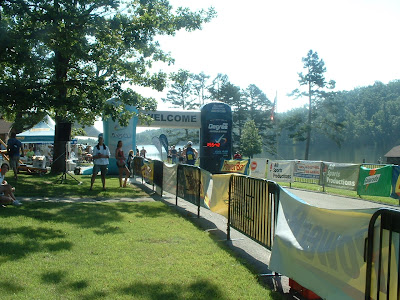 The run to the finish was slightly downhill and that was the best part of the whole run. I think I was getting under 6 minute miles on that little section. I had a horrible run, but still managed to have the 27th best run time overall. My total time was 1:50. Not bad, but out of the money for an age group award. That is the thing about Tri's, I am so used to getting an award for running, but when you have to put all 3 disciplines together, it is a lot tougher. My main thing is to improve the swim. Once that is there, look out.

Overall, it was a great race. It was very well organized, had great swag, and the location could not have been better. One of my biggest complaints about the Tulsa Tri is that there is nowhere to get out of the sun or for people to really hang out. I know it is because of the lake area, that there is not much you can do about it, but at this lake you had plenty of shade for lawn chairs, picnic tables, catered food, podiums for the award groups, and great announcing for when people finished. I would recommended this Tri to anyone, but you had better be prepared for the monster hill that you have to hit twice. The results can be found here.
Posted by tomdog at 11:37 AM No comments:

Something Cool Came in the Mail 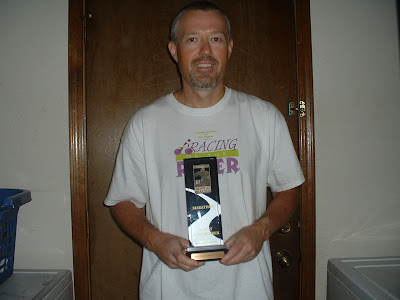 Got my award for the OKC Marathon. Really beautiful award. 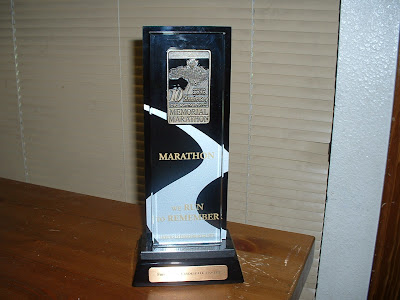 In taper mode for the Tulsa Tri this weekend. First full Olympic Triathlon. I can't wait!
Posted by tomdog at 10:54 AM No comments: